Feminism Empowers Muslim Women: While Anali Ali has experienced misogyny and bigotry firsthand, she categorically rejects victimhood and instead promotes empowerment for Muslim women. Inspired by her family’s legacy of service, Ali understands that leaders need to both uplift others. Her experience as a teacher has reinforced the importance of addressing challenges – both inside the Muslim community and in broader American society – with honesty and accountability.

Roots & Education: Born in Karachi, Pakistan, Anila Ali was raised in a family dedicated to public service. Her great-grandfather served as the Prime Minister of Kashmir. Her grandmother served as Secretary of the Muslim League and authored several books on Islam and women’s rights.Her father was a journalist and diplomat who founded Pakistan’s first news agency and wrote over a dozen books, including a biography of the Prophet Muhammad. Her mother was a teacher and a philanthropist. 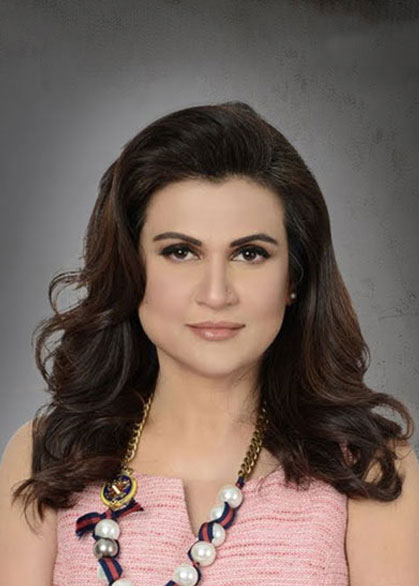 Teenager in London & Meeting Lady Di: Ali was educated in London in the 1980s while her father served at the Pakistani Embassy. Experiencing discrimination from some classmates prompted her to join various interracial community-building projects. She also became an active youth leader for the All Pakistan Women’s Association. One highlight of her time in the UK was meeting Princess Diana.

From Pakistan to Saudi Arabia to America: : After returning to Karachi for university studies, Ali earned a Bachelors at St. Joseph’s Convent and a Masters at the University of Karachi. She married and lived with her family in Saudi Arabia, where she experienced firsthand restrictions on basic women’s rights. In 1996 her family relocated to southern California, where she earned a Masters in Education from Concordia University.

Post-September 11 Profiling: To address border profiling many Muslim-Americans experienced after 9-11, Ali worked with NYU Law School to produce a documentary titled “Americans on Hold: Profiling, Prejudice, and National Security.” She also co-authored a children’s book promoting tolerance (titled “Mommy, Am I…?”) that tells the story of a third-grader named Aisha who experiences derogatory comments at school.

Philanthropic Leadership: Ali has chaired the International Leadership Foundation, which promotes internship opportunities for Asian American youth. She currently serves on the Advisory Board of the Olive Tree Initiative at UC Irvine, which promotes meaningful student dialogue on geopolitical conflicts. In 2018, she received Cal Southern University’s Hecht Philanthropy and Service Award.

Ali lives in Washington D.C. and is the mother of Sara and Danyal.